Above is a picture of Christ Church, Frederica, Georgia. Originally, a mission of the Church of England, the Rev. Charles Wesley conducted the first services inside the walls of Fort Frederica in 1736. Later brother, John became the Rector. Of course, both Charles and John are known for their eventual formation of the Methodist Church, but March 3, is my reason for calling it to our attention as a day set aside in our liturgical calendar to celebrate the witness and the lives of both John and Charles Wesley.

Much could be written about these men. Their mother Susanna was no shrinking violet as she had a remarkable influence upon what was considered a holiness method of spiritual formation which in time became known as Methodist. No doubt, many are familiar with the hymns Charles wrote. The Episcopal hymnal is filled with his work and even though he wrote over 9,000 hymns he is still often referred to as the “forgotten Wesley!” He will however, always be remembered with hymns like, “Love Divine, All Loves Excelling” or “Hark! The Herald Angels Sing” as they along with countless other hymns are deeply embedded in the heart, mind, and worship for many of us.

John Wesley is the one who is known more as the preacher and organizer of church circuits and lay preachers who brought a spiritual fervor to the American colonies. In fact, when called home and disciplined by his Anglican bishop for his missionary fervor, Wesley simply replied “the world is my parish.”

Although Wesley was not trying to start a new denomination, his life of prayer and his change or transformation of faith taking him from the intellect of his head, to a more personal place in his heart, was compelling. He writes of unwillingly attending a prayer meeting on Aldersgate Street in London where he listened to a reading of Luther’s preface to the Epistle to the Romans about God working in the heart through faith in Christ. As he listened to this description of change, he felt his heart was “strangely warmed.” From this experience he is known for writing his “Covenant Prayer” which brought him to a place of holy obedience.

The prayer and the experience of John Wesley is not that far removed from studies of St. Paul and his experience of conversion. Granted, there are those who tend to instinctively draw back or shut-down with this discussion of conversion or transformation. Holding on to the status quo, or to the secure place of control, often prevents us from appreciating the witness of those who have gone before us. This great company of saints have much to teach, as we to learn. 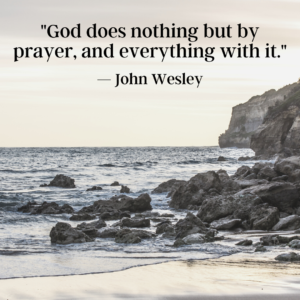 When it comes to prayer, John, Charles, and Susanna Wesley have all taught me the importance of living prayer. In one sense, living prayer is the opposite of dead prayer. Dead prayer means prayer doesn’t work, it doesn’t function, it is of no use. Living prayer is the prayer of faith. It is the kind of prayer that opens a dialogue with God. It starts with letting God set the agenda for the day. And then the living prayer begins with what you and God plan on doing together. Try it. See if that doesn’t warm your heart.

Robin T. Jennings is an ordained priest in the Episcopal Church, and an accomplished author, speaker and teacher who inspires his audiences with Biblical guidance and spiritual insights into everyday life. Whether he has the opportunity to speak to churches, businesses or organizations, Robin’s lifetime of work in spiritual transformation and renewal connects individuals with timely topics such as the importance of community, hope, identity and the search for meaning which are inevitably woven into his message.